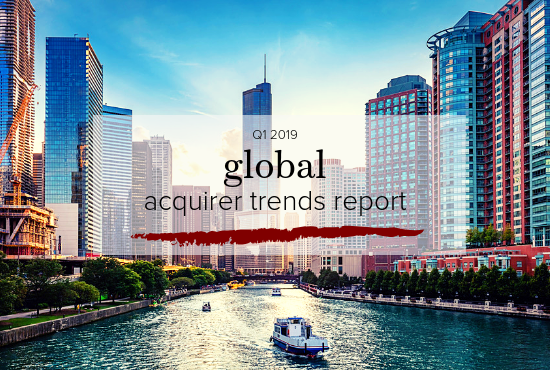 Mid-market companies don’t operate in a parallel universe, but there are quarters when it feels that way. Even as world commodity and stock markets rebounded after a weak fourth quarter in 2018, mid-market mergers and acquisitions (M&A) volume stayed remarkably steady.

Global deal totals dipped slightly in Q1 2019 compared to Q4 2018, down to 2,379 from 2,762, but the fourth quarter is often stronger given the motivation to close deals by year-end.  When looking at deal volume from Q1 2018, however, which provides a purer year-over-year, apples-to-apples comparison, we see deal flow has remained robust over comparable quarters, as total deal flow in Q1 2018 was 2,595.

In North America, 1,338 deals were completed during the first quarter of 2019 compared to 1,492 in the previous quarter, but here too, the year-on-year comparison suggests not much has changed – with Q1 2018 showing 1,452 transactions.

As a percentage, the seasonal adjustment was a little sharper in the UK & Ireland (UK&I), which recorded 320 deals in Q1 2019 compared to 405 in the fourth quarter of 2018 – not particularly surprising given the level of uncertainty that continues to surround Brexit.  But once again, there was less variance when benchmarked against last year’s 344 deals for Q1 2018.

Unlike startups where it’s easy to be blinded by visions of unicorns…mid-market companies operate in an environment where the business leaders know their customers and their company intimately and are generally playing a long game.

What’s driving this overall stability in mid-market M&A? There are a few key factors:

Of course, the business cycle hasn’t been repealed, merely prolonged, and there are sure to be setbacks in the global economy that will affect the mid-market M&A activity. But over time, we believe, many mid-market companies will continue to outperform and transaction activity will reflect this.