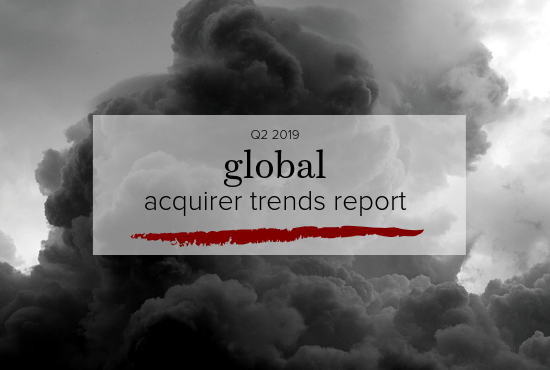 Transaction volumes decreased slightly in the UK and Ireland (UK&I), with 292 in Q2 down from 320 in Q1, a decline of about 9.5%. Given the risk of macroeconomic chaos that could result should the UK leave the European Union on October 31 without an exit agreement, the results were actually a testament to investors’ enduring esteem for British companies.

Elsewhere in Europe, M&A activity in the DACH region (Germany-Austria-Switzerland) stayed strong, rising to 272 deals in Q2 from 264 in the first quarter, an increase of 3%. The Nordic market grew more dramatically, with deal activity increasing to 298 in Q2 from 256 in the prior quarter, a climb of 16.4%. But the star in Europe in Q1 was Iberia, where deal volume jumped from 83 to 123, a rise of more than 48%. Further east, Asia-Pacific volumes fell from 118 in Q1 to 101 this quarter, a decline of 14.5%, perhaps a reflection of trade war concerns.

“Global warming, trades wars and politicians – there were several weeks in the second quarter when the risk factors started to look like the makings of a perfect storm. Yet for mid-market M&A, the second quarter ended up being more like the perfect swim – not too cold, not too hot, and not too choppy.”

Interestingly, while overall global deal volume was up in Q2, the number of total inbound deals were down to 818 in the second quarter from 826 in Q1, an indication that buyers may be becoming more conservative in their search for good assets, preferring known quantities to those overseas.

Looking ahead to the second half of the year, the outlook remains strong. Unemployment is at record lows in the US, and most of Europe is also enjoying fairly strong levels of employment. Furthermore, central banks are all but promising rate cuts from today’s already low interest rates.

However, we shouldn’t take the current calm for granted. There are several potential disruptive factors that could have a severe impact on the global economy. Trade wars and real wars will always impact the global economy. Brexit, though now long anticipated, could still have unpredictable consequences. Finally, the climate threat and extreme weather could bring about unforeseen consequences like damaging crops and disrupting supply chains.

Firefighting: the Financial Crisis and its Lessons

If something serious were to happen, central banks have warned today’s ultra-low interest rates mean they won’t be able to cut interest rates as they did in the last crisis. And high levels of public debt would limit their options for stimulus spending.

The world’s current macroeconomic leadership is also arguably much less experienced than its predecessors in 2007-2008, when the people in charge included a scholar on the Great Depression (Federal Reserve Chairman Ben Bernanke), the former chairman of Goldman Sachs (Bush Treasury Secretary Henry M. Paulson Jr.), and a former undersecretary of the Treasury who had managed financial crises in Brazil, Mexico, Indonesia, South Korea, and Thailand (Obama Treasury Secretary Timothy Geithner).

They see more financial crises as inevitable, and are not optimistic about the ability of anyone to prevent them. As they write in their recent co-authored book, Firefighting: the Financial Crisis and its Lessons, “Financial systems are inherently fragile, and financial risk tends to migrate around regulatory obstacles, like a river flowing around rocks. There’s no sure way to avoid a panic, because there’s no sure way to avoid overconfidence or confusion.”

But for now, at least, the deals continue.