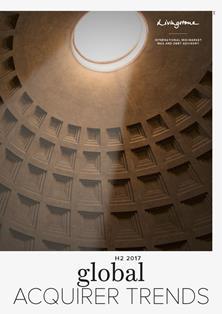 The latest issue of Livingstone’s Global Acquirer Trends Report, H2 2017, shows M&A activity accelerated in the second half of 2017, driven by strong activity in the US and, particularly, the UK.

Even in the midst of the Brexit negotiations, M&A numbers in the UK increased by 16% on levels in the first half, with growth in both domestic deals and from overseas buyers. In total, there were 907 deals over the period in the UK and Ireland (the vast majority from the UK), 422 of them with international buyers. That compares with 780 overall in the six months before (380 inbound). North American and European buyers remain the most active participants in the UK market, accounting for 45% and 38% of the inbound deals, respectively.