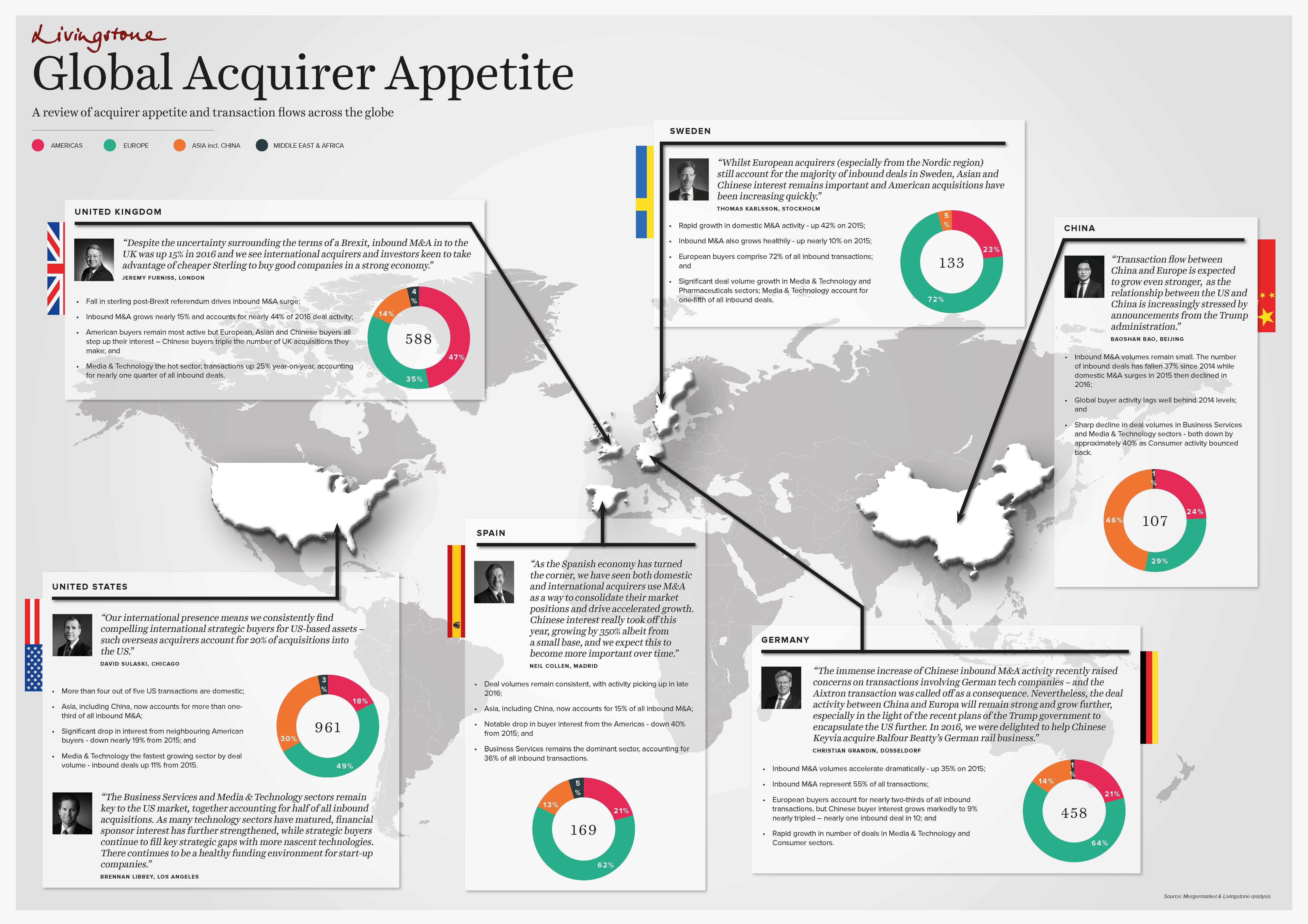 While 2016 was a year of significant political change, particularly given the US election result and the Brexit vote, it was a strong year for M&A activity across Livingstone’s key markets of the USA, UK and Europe, and Asia.

In contrast, M&A activity in China itself declined, with volumes of both domestic and inbound acquisitions falling compared to 2015 levels after a surge in domestic deals that year. The Industrial sector is still the most important for inbound M&A volumes, accounting for 40% and growing by 25% year on year, compared to a 40% decline in Media & Technology (now around one inbound deal in ten).

In the UK, the plunge in Sterling following the Brexit vote saw many international groups benefit from cheaper acquisitions, with a surge in Q4 dealmaking as uncertainly receded (at least temporarily). The Media & Technology sector grew fastest, by 25% year on year, but accounts for less than a quarter of inbound acquisitions, compared the Business Services sector at nearly 40% – reflecting the UK’s strong service-led economy.

Transaction volumes in Sweden were driven by a very rapid (40%) growth in domestic acquisitions, with cross-border dealmaking accounting for a little under half of all M&A volumes, consistent with the past couple of years. Three quarters of inbound deals are made by groups from other European countries, while acquirers from the Americas account for nearly 25% of inbound acquisitions but are quickly increasing their M&A volumes (up 15% year on year). V

olumes in Spain were stable, with inbound acquisitions accounting for just under half of all deals – consistent with the last two years. Chinese activity surged by 350% – but accounted for only one inbound deal in 20, or one acquisition in 40 overall. Business Services accounts for more than a third of all inbound acquisitions, while the Industrial sector accounts for one in five.

The USA remains the world’s largest M&A market, with total deal volumes (roughly 5,000) slightly lower than in previous years but the proportion of inbound acquisitions increasing from 15% in 2014 to 20% in 2016. Most of these acquirers were from Europe (consistently around 50%), but Asian and Chinese acquirers now account for nearly a third of all inbound M&A.

The Business Services, Industrial and Media & Technology sectors each account for around 25% of inbound deal volume, with Media & Tech volumes growing significantly faster than the other sectors. As the Trump administration focuses on encouraging domestic manufacturing, we may also see an increase in capex investment as well on domestic M&A.