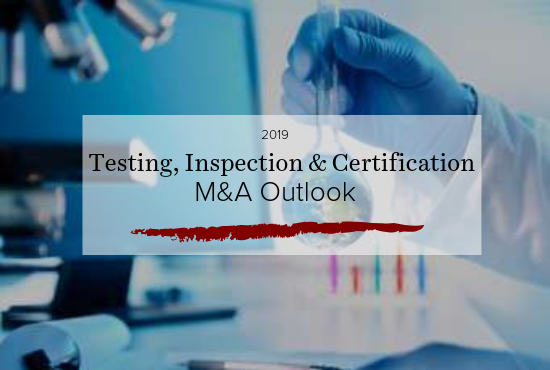 2018 was a prosperous year for TIC sector M&A activity, with 128 completed transactions, the most of the six years analyzed (2013 to 2018). However, TIC M&A decreased in each subsequent quarter of 2018 after the first quarter saw the (at the time) second highest transaction count (38) of any quarter since the beginning of 2013.  Interestingly, 1Q2019 saw a record-high 58 closed TIC transactions driven by a record-high number of deal closings for both public strategic buyers (23) and private strategic buyers (32).  Overall, 2019’s M&A activity is on pace through August to set a new transaction count record in the space.

The incredible number of transactions completed in the sector since 2013 has resulted in fewer available TIC targets, particularly those with unique testing services attributes. At the same time, high valuation multiples for less-differentiated remaining targets are, from the perspective of most industry consolidators, seemingly unsustainable, as these parties face a “build versus buy” decision with every new service or market expansion opportunity.

Because of these sector-specific conditions, the largest market participants have instituted a greater emphasis on operational performance optimization, including integration of previously acquired targets, as well as organic growth via greenfield strategies to build new laboratories. 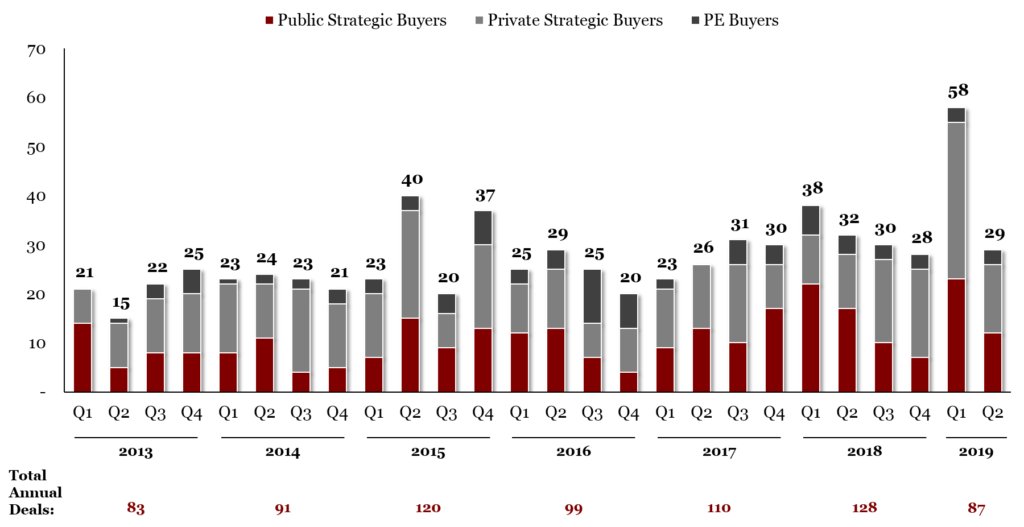 During 1H2019, publicly-traded TIC sector companies’ collective TEV/EBITDA and stock price performance have continued to improve since hitting recent-year lows at the end of 2018. However, on a relative basis, the public TIC index has lagged global indices since August 2018, and didn’t recover as strongly as the broader global markets since January 2019. There are several reasons for this lag, including slowing organic growth, decreasing margins, and market anticipation of a potential economic slowdown, and the resulting impact on TIC sector participants.

Outside the U.S., a number of potential economic landmines may impact the TIC sector in the short to intermediate term. Examples include ramping trade tensions, slowing growth in the Eurozone (in part driven by Brexit resolution uncertainty) and China (driven in part by tariffs imposed by the U.S.), and increasing sovereign debts. Conversely, low unemployment rates, low oil prices, and remarkably resilient financial markets project strength. The upcoming 2Q2019 earnings season will provide important indicators of TIC’s next move.

Consistent with the previous five years’ activity, 2018 transactions experienced continued double-digit EBITDA valuations from both strategic and PE suitors, with incrementally higher multiples for quality, unique assets that provide difficult-to-replicate services. These seller-favorable market conditions remain driven by the “get it while supplies last” mentality under which large industry consolidators have operated over the last decade.

However, targets without adequately differentiated services and/or niche sector focus are likely to experience steady or declining multiples on a relative basis. For these common-services businesses, expected enterprise values are limited by strategic acquirers’ closest alternative: greenfielding new locations with similar capabilities (which are often already within their diversified TIC skillset). Despite lower relative valuations for non-differentiated services, demand will remain high, as PE firms search for anchor investments in the TIC space and strategics search for assets that expand their reach into new markets.

The trend of large strategics paying outsized multiples to achieve revenue growth is unlikely to continue into perpetuity, as investors will eventually prioritize serial acquirers’ return on investment metrics over their growth-at-all-costs approach of the last decade.

This recent period of acquisition-based growth was driven by a “land grab” during which unique service providers were absorbed by established industry players for both offensive (e.g., cross-selling new testing capabilities to existing clients) and defensive (e.g., “if I buy the target, my competitors can’t”, forcing them to develop new capabilities internally, which is both cost and time intensive) purposes.

By definition, as the TIC industry becomes less fragmented, M&A activity will slow. While entrepreneurs will continue to launch new TIC companies, the inventory of available targets (especially with differentiated services and scale) will be greatly reduced in comparison to those of historical periods, which developed and evolved over decades. 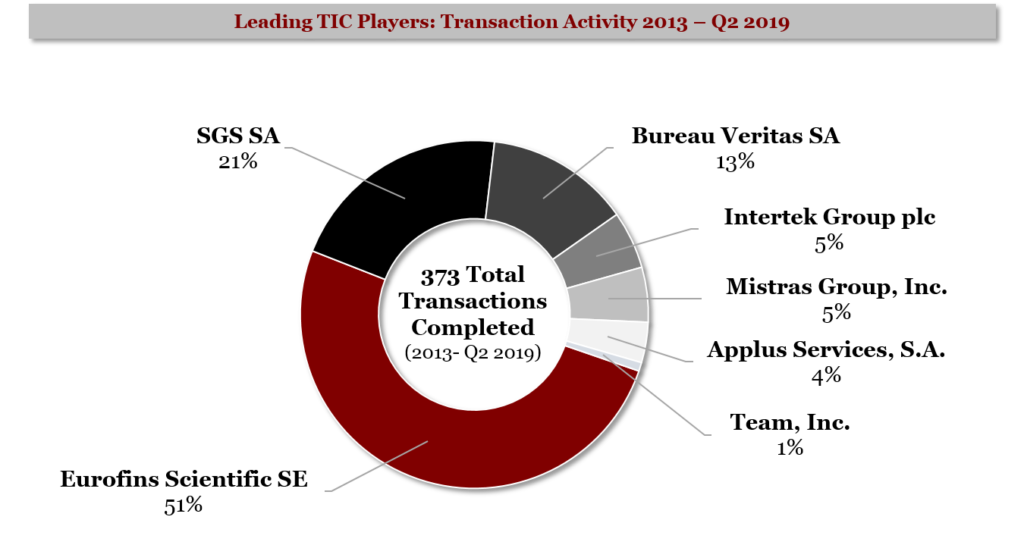 Many of the usual suspects, such as Applus Services, Bureau Veritas, Eurofins Scientific, and Intertek Group, made acquisitions in 2018. Looking out through 2019, the sector will continue to see both strategic and PE interest in assets.

PE investors, in particular, are attracted to TIC companies’ asset-light business models, favorable regulatory tail winds, recurring/repeat revenue characteristics, and fragmented industry characteristics (especially in the U.S., which is behind Europe in terms of industry maturity and consolidation). A high number of PE firms have expressed TIC sector interest to Livingstone. These parties face a relatively depleted hunting ground, as the number of platform vehicles in the TIC space has diminished during the last six plus years of heavy M&A activity.

Accordingly, many PE shops are stuck in perpetual search mode seeking a foundational asset. Once they find their mark, these same parties often experience investment committee push-back when faced with paying (often uncomfortable) double-digit multiples in order to be competitive.

For some, this hurdle will be too high to clear through committee, which presents perhaps the biggest barrier to entry for investors new to TIC. Moreover, for those who successfully complete a deal in the space, high debt levels typically associated with double-digit-multiple purchases reduce post-closing cash flow. Thus, post-closing debt pay down is important to balance sheet health and capacity to make add-on acquisitions, which are important to buy down platform purchase multiples prior to exit.

Benefits of Operating Leverage and Scale

The benefits of scale will continue to favor larger industry competitors. While smaller TIC companies will continue to exist, their most compelling position in the market will be as providers of new and innovative testing techniques not already provided by their larger counterparts. Smaller players without the above-listed benefits of scale will still compete head-to-head with larger industry companies but will do so through relationship- and/or price-based differentiation. Collectively, these strategies result in lower margin profiles for sub-scale players.