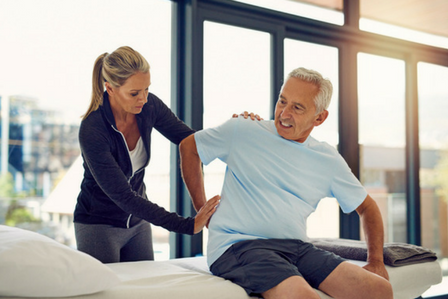 Founded in 2004 by current CEO, Dave Van Name, Upstream has grown to nearly 300 owned clinics in 15 states and 100+ managed clinics across ~20 states in just 13 years.  Revelstoke acquired Upstream from its prior long-term PE owner – Charterhouse Capital – in December 2015. Starting from a single Maryland clinic in 2002, Drayer steadily rose to 40 clinics before it was recapitalized by Chicago-based PE investor, Linden, in 2008.  Under Linden’s four-year stewardship, Drayer had more than doubled its clinic count when it was sold again to GS Capital Partners in July 2012. Today, Drayer boasts 150+ clinics across 14 states mostly east of the Mississippi River. 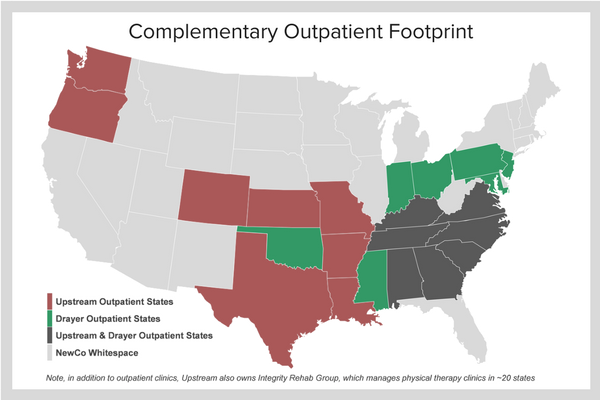 Geographically, Upstream and Drayer are a complementary fit.  The overlap of the businesses occurs in just one-third of the footprint, or seven Southeastern states. In these overlapping markets, Upstream’s leaders will likely pursue value-enhancing initiatives such as improved payor negotiations, revenue cycle consolidation, clinic alignment, rationalizing regional field management, and other back-office overhead reductions.

Based on the number of clinics in overlapping markets, one could reasonably anticipate the synergies in these markets to reach at least several million dollars. Drayer has fueled historic growth primarily through de novo expansion, opening an average of ~12 clinics annually. In contrast, Upstream has achieved a stronger and more balanced growth trajectory, using acquisitions to bolster its position in existing markets as well as to enter new geographies where the company could then apply its highly effective de novo development strategy. Having opened anywhere between 20 and 40+ new clinics per annum over the past few years, Upstream could be approaching saturation in its most dense geographies, causing the company to look beyond its existing footprint to identify new regions through which to deploy its growth model. Access to the seven Drayer states in which Upstream lacks a presence creates a great opportunity for Upstream to continue its expansion.

Current M&A Outlook is an Ideal Environment for Sellers

The environment for M&A in physical therapy has never been more favorable in terms of valuation. The influx of private equity into the space has led to the development of over 15 strategic buyers that are voraciously pursuing acquisitions and partnerships. The prevalence of these PE-backed consolidators – supported by favorable industry tailwinds, a stable reimbursement environment, strong operating performance, and robust debt markets – has created an ideal environment for sellers. The nearby chart demonstrates the over 50% rise in the valuation multiples for platform physical therapy transactions over the last decade.

Logical questions relate to how and when Revelstoke and GS Capital will ultimately monetize the investment in Upstream-Drayer. Upstream is a relatively young investment for Revelstoke, whereas GS Capital has been invested in Drayer for over five years. While multiples in the PT space are white hot – both in the private and public markets – Upstream’s leaders will need at least a year or two to integrate the businesses, generate synergies, and demonstrate the growth potential of the larger organization.

The combined business will certainly have the scale to be an IPO candidate or an attractive investment for a mega private equity fund. Though, if the age of major consolidation is upon us, could the deep-pocketed private equity investors behind ATI (Advent International) or Athletico (BDT Capital) have the stomach to forever change the national landscape in outpatient physical therapy?

Livingstone has been one of the most active M&A advisors to the physical therapy industry, advising on over a dozen sale or refinancing transactions with private practices, strategic buyers, and private equity investors.