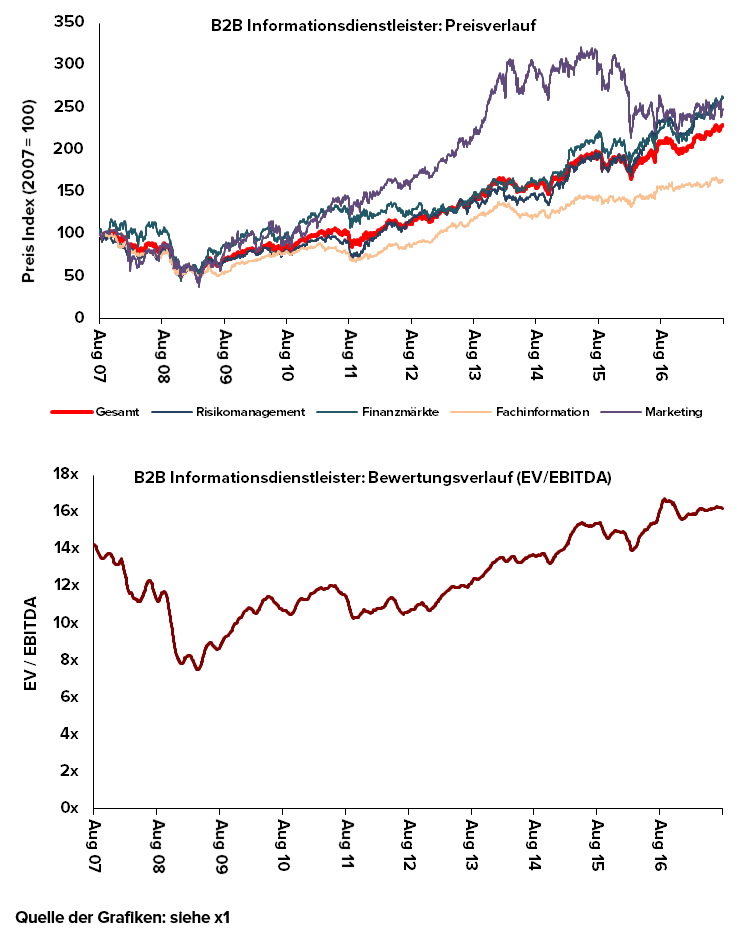 While the stock markets are in the summer break, the stock index for stock market-listed information service providers reached a new all-time high at the beginning of the summer of 2017 with a breakthrough of the mark of 230 points. Excluding an index start point of 100 in August 2007, this sector is at a 10-year valuation peak in absolute terms as well as in the EBITDA valuation multiples. Peer Group companies are currently being evaluated with multiples of more than 16x EBITDA, which is more than twice as high as the low point at the turn of the year 2008/09.

The peers in the subsectors of the B2B information service are quite different in the case of share performance and valuation multiples.

The strongest rise can be seen in two subsectors: Financial Markets Data and Credit & Risk Information. In both groups, sales and earnings have recovered not only from the decline in the financial crisis, but also show significant growth over 2007, which is not least a testament to the structural growth of data volumes and data usage as well as the technologies used for this. While the increase in the value of the providers of financial data is essentially the result of an increase in the company’s revenues, the peers in the Credit & Risk Information segment show a significant increase in valuation multipliers to EBITDA factors of 15.9x, an increase of 20% of 2007.

Financial Data
All financial data providers have developed very positively and show an average increase in revenues of 160% over the period under consideration (approximately 10% growth pa). The market capitalization of the Peer Group developed in the same way, with MSCI Inc. (NY), the provider of investment banking services for indices, portfolio and risk analysis, and research by far the most strongly developed.

Credit & Risk
The development of Credit & Risk information providers is more diversified. FICO (formerly known as Fair Isaac & Co.), a provider of financial services in the United States, was particularly successful in scoring the creditworthiness, thus optimally meeting the needs of the credit industry for solutions to the objectivization and automation of lending and rating processes. As a result, both the yields and the valuation multiple have doubled during the period under review, while market capitalization has quadrupled.

In contrast, Dun & Bradstreet has concentrated heavily on the retreat from various international markets and the operational restructuring resulting from the financial market crisis over the past decade. The acquisition of Credibility Corp. in 2015, D & B was able to re-grow, but the company is now about 9% lower than in 2007 at a peer group’s low multiplier of 12.4x EBITDA.

Marketing
The companies in the marketing sector performed almost as well as the aforementioned subsegments and showed the strongest performance over a longer period of time over the past ten years. Nielsen and Alliance Data were able to benefit from the trend towards direct marketing in interactive media, the so-called performance marketing. Alliance Data was able to show strong growth both in revenue (+ 180%) and the valuation mix, with the acquisition of Epsilon rising by 60% to 22.7x EBITDA.

Information on specialist
providers of specialist information has developed comparatively stable over the last 10 years. In contrast to the massive incisions experienced by the B2C publishers and information providers due to the progress of digitization, the business models of providers for B2B information have been less subject to disruptive innovations. Most providers were able to benefit from the opportunities offered by digitalization in the area of ​​increasing sales as well as cost savings through process automation. The Peer Group shows an average increase in revenues of approximately 50% compared to 2007. In combination with a slight increase in valuation multiples to approximately 15.5x EBITDA, this led to a significant increase in the value of the companies considered.

RELX (Reed / Elsevier) and Euromoney show the strongest growth in value over the past decade, which is mainly due to the strong earnings growth in both cases. In contrast, vendors such as Informa and Wilmington had a rather flat development and were able to stabilize their yields slightly above the 2007 level. At nearly constant EBITDA multiples, the increase in value is low compared to the other peers.

Conclusion
The sharp rise in the valuation levels of stock-listed information service providers is also reflected in the M & A transactions. Well-earning companies in this segment earn premium prices and are attracted by a high level of interest from strategic, financial investors.

Of course, the question arises as to how the already high valuations on the capital markets will continue to develop, from where the further growth is to come, and to what extent earnings and valuation levels are sustainable. In part II of our analysis, we will focus more on the growth drivers and classify today’s evaluation level in the context of historical multiples and the development of business models over the past ten years.