Sunil Gupta is the Edward W. Carter Professor of Business Administration and Chair of the General Management Program at Harvard Business School. He is also the co-chair of the executive program on Driving Digital and Social Strategy.

In this second of three guest posts, Professor Gupta shares his thoughts on Mobile Marketing.

In marketing, money follows attention
As the penetration of both smart phones and high speed mobile internet has risen, attention has shifted decisively away from the desktop computer towards the smartphone. At 34 hours per month, consumers now spend more time consuming media on mobile devices than they do on desktop computers (27 hours).

In 2014 money certainly followed this shift in attention; mobile advertising spend is thought to have reached $18 billion. Despite this growth, the effectiveness of mobile advertising is variable and sometimes open to question. In the short term it must evolve to engage consumers more effectively through their individual combination of devices and apps, whilst in the medium term the next generation of mobile technologies offer spectacular opportunity.

Apps not ads drive value on mobile
However, behind the headline shift in media consumption sits a less expected trend away from aimless internet browsing of the kind that advertisers love, towards ‘doing’ things – 86% of smartphone owners’ time is spent using apps, only 14% browsing the web.

Advertisers’ first response to the shift to mobile was to extend desktop strategies onto the mobile internet, producing small-screen optimised webpages complete with diminutive banner adverts. The lesser scale of a mobile device – smaller screen, limited bandwidth – reduces the effectiveness of these to the extent that only 15% of mobile users report intentionally clicking a display advert, and of this already small group only 6% then interact with the brand.

A further side effect of the small-screen format is the number of ‘fat finger’ accidental clicks – reported by 49% of mobile users – which result in misleadingly high click-through rates, distorting advertisers’ understanding of the effectiveness of the channel.

Consumers’ capacity for apps limited
Whilst the clear message of usage data is that apps are the route to successful engagement on mobile devices, it also indicates that users’ appetite for apps rapidly becomes saturated – the number of apps used on a monthly basis has stagnated in the high twenties, having hardly grown in the past few years despite a sustained increase in the quantity and quality of apps published.

Brand apps therefore have to justify their place in the limited roster of frequently used apps by doing something either useful or entertaining.

The basic needs of mobile life – email, maps, weather etc. – are well served by the embedded apps on most mobile operating systems. These functions are therefore effectively owned by the platform, and difficult to displace.

Innovative functionality to add value for the consumer has been a consistent theme amongst successful brand-led apps. A great example of this in the UK market is Sainsbury’s ‘Food Rescue’ app, which suggests recipes directly from the contents of a consumer’s fridge, enabling them to eat food that would otherwise be wasted.

Entertainment apps offer both the greatest diversity and great scope for brands to engage consumers without the need to overcome the hurdle of displacing an incumbent functional app. Over 2015, I predict that brands will significantly increase creative and content spending in mobile in an effort to secure places in the app roster. 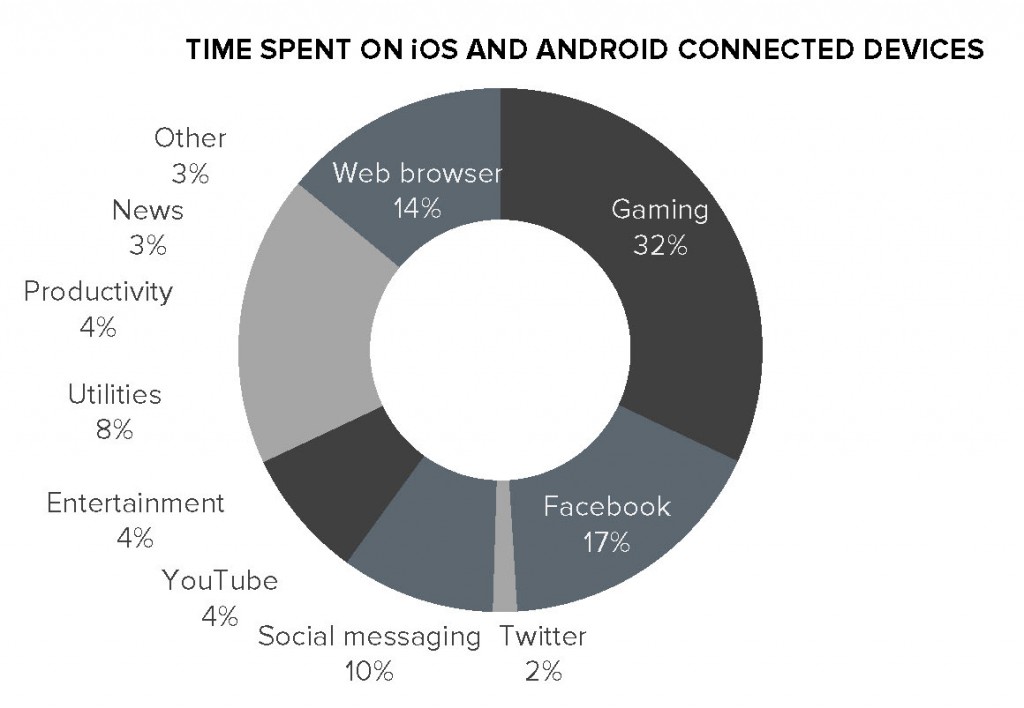 Location data – does it have real value?
The major piece of additional data that a marketer has on a mobile app compared to a public website is location. But location provides the advertiser with exactly the same functionality as a printed billboard: an advert visible in the local area.

Combining location with user profile data becomes more powerful – it allows segmented local promotions that sell differently to people walking around the same store. In my experience, the value current location-based marketing can add, beyond the segmentation that can already be implemented with good CRM and email, is quite small. Segmented marketing messages are relatively effective with or without location-based prompts.

Transformational value in location data would be unlocked by the next level in spatial precision. Imagine that merchants could tag users to section, rail or even SKU within a store – tracking of the physical browsing experience with the granularity that is possible online. The result of this would be fully-integrated omni-channel marketing. A major retailer could know all of its customers in as much detail as their personal shopper, and selectively sell to them at the SKU level, as they walk around its stores and after they leave them.

Opportunity hiding in plain sight – mobile maps
The functional mobile app akin to the most profitable application in desktop marketing – web search – is mapping. A user opens the map and tells it what he or she is looking for and where. At that point, the value to local merchants of appearing first, or more prominently in the map search is a meaningful proportion of the potential incremental revenue.

Unlike web search, geographic search marketing suffers from a difficulty in demonstrating RoI. When a customer walks into a shop, there is no click trail to demonstrate that the search brought them there rather than the sign above the door. However there are other mechanisms to measure the incremental effect such as on/off trials, or tracking through the payment process that could be implemented by a tech giant such as Google.

Neither Google nor Apple – who dominate mapping apps – are yet monetising mobile geographic search advertising on the scale of search, although the further integration of maps and Adwords during 2014 brought this closer to realisation.

Apple’s recent acquisition of Coherent Navigation, a provider of point of interest data, and rumoured street-level mapping project indicate the strategic priority it is currently applying to location. Given the size of the opportunity I would be surprised if we do not see more location-based advertising projects launched by major tech companies in the next 18 months.

Huge opportunity in next-generation user interfaces
If the user interface move beyond the phone or tablet to become more immersive – an overlay on the world delivered via Google glass, Microsoft Hololens or something similar – the scope for mobile advertising would increase exponentially. Ultimately, if mobile devices succeeded in capturing the ‘spare’ attention inherent in the unfocussed time in daily life, the value at stake is at least equal to the advertising revenue of all billboards, and free newspapers.

As 2015 has already shown, whilst the Google glass has been on the market for some time, the market for augmented reality is accelerating with more products coming to market at increasingly reasonable price points. Whilst $700 a piece for Epson’s latest entry may be far from the tipping point for widespread adoption, I expect augmented reality product launches to continue through 2015 bringing it closer to mass-affordability.